EMBRC-France, entry point for exploration of marine bioresources in France

With 11 million square kilometres, France possesses the second biggest exclusive economic zone (EEZ) in the world. Allocated in all climates, this EEZ offers a biodiversity of considerable richness. However, marine biological resources, and their potential applications in areas as varied as agriculture, health or cosmetics, remain little explored. 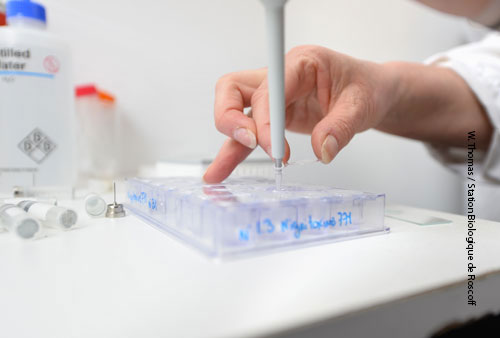 Each with its specialities, the three marine stations of Banyuls-sur-mer, Roscoff and Villefranche-sur-mer jointly operated by the Sorbonne University and CNRS endeavour to deepen the knowledge of this biodiversity. They have united forces within the Centre National de Ressources Biologiques Marines, EMBRC-France. The entry point for the exploration of marine bioresources in France, EMBRC-France receives support from the “Investissements d’avenir” program and the strong involvement of the Brittany, PACA and Languedoc Roussillon Regions and the Mer Bretagne Atlantique et Mer Méditerranée competitivity clusters in its governance.

EMBRC-France offers academic scientists and businesses simplified access to ecosystems, to marine biological resources, to state-of-the-art equipment and to the complementary skills of the three marine stations of the SorbonneUniversity  and CNRS: Banyuls, Roscoff and Villefranche-sur-Mer. Through on-site visits or remote services, EMBRC-France unlocks difficult access to marine biological resources and makes available a major tool for the exploration and exploitation of marine biodiversity, from the molecular scale to ecosystems.

In 2009, the European Strategy Forum on Research Infrastructures (ESFRI) selected EMBRC to become one of the future major European research facilities.This European marine biological resource centre links the main European* marine biology stations which will be a lever for innovation. At the start of 2014, six countries including France concluded a protocol agreement for its creation scheduled for 2016.